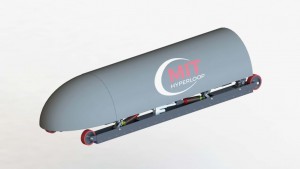 ELON MUSK’S WILD Hyperloop has captivated engineers ever since he almost casually mentioned the idea three years ago. After all, who wouldn’t want to contribute to a potentially revolutionary transportation system that would shoot people across vast distances at high speeds through a giant network of tubes?

The idea’s attracted the attention of at least two startups, who may want to take a look at the work of the 124 student teams gathered at Texas A&M University for the inaugural Hyperloop Pod Competition. The event challenged students from universities (and three high schools) around the world to design a prototype capsule, or pod, that would carry passengers through those tubes. Twenty-two teams, which had names like Team Hyperlynx (University of Colorado, Denver) and Team WARR (Technische Universität München), won a trip to California in June to test those pods on the Hyperloop test track SpaceX is building.

Top honors, for best overall design, went to the crew from Massachusetts Institute of Technology. That isn’t terribly surprising, as MIT is a renowned engineering school, after all, but what’s funny is the concept won even though it quite deliberately did not include space for people, or even cargo.